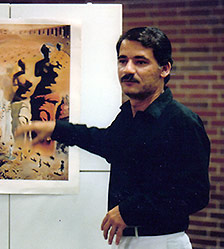 World Premiere of “Medjugorje” for string orchestra and percussion

Rhapsody for Piano and Orchestra, recorded by the Kiev      Philharmonic Orchestra, conducted by Robert Ian Winstin with      Dmitri Tavanets as soloist, is scheduled to be released.

The composer will give a talk on his music at Furman University, South Carolina

Paul Davies appeared as soloist with the South Valley Symphony, conducted by John Graham, in a performance of Richard Addinsell’s Warsaw Concerto at The Gavilan College Theatre, Gilroy, CA.

Two scenes from Paul Davies' new opera Carlota were presented at the University of California at San Diego’s Conrad Prebys Music Center as part of the Sonic Diasporas Music Festival.

Cathedral 1947, for two pianos, a series of musical reflections on the work of Abstract Expressionist Jackson Pollock, was performed by duo runedako at the University of California at San Diego’s Conrad Prebys Music Center as part of the Sonic Diasporas Music Festival.

The Warsaw Concerto was performed by the Winchester Orchestra, conducted by Henry Mollicone, with Paul Davies as soloist.

Premiere of From a Theme by Brian Easdale for solo piano, performed by Paul Davies at Foothill College during the Music Department Faculty Recital.

The lecture/presentation “Is the Warsaw Concerto Really a Concerto?” was delivered at Foothill College.

Premiere of Lennon Variations for harpsichord and piano was performed by Kate Ryder and Jane Chapman, at The Warehouse, London, England.