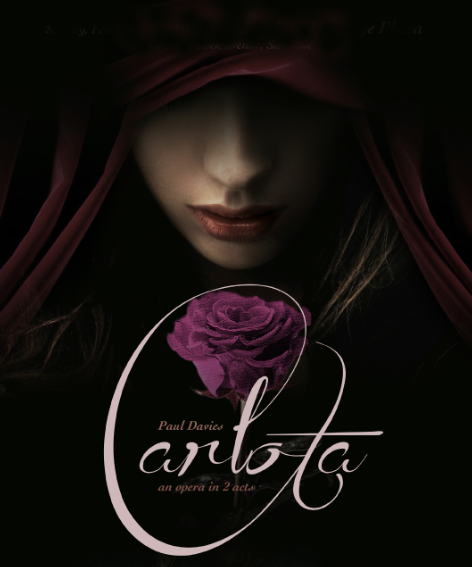 • ballet troupe is required for Scene 2—“Reception of the Indians”

• ballet troupe is required for Scene 1—“The Masked Ball at the Tuileries Palace”, Paris.

“…stirring and absorbing new opera. A tragedy that Davies treats with admirable insight and musical dexterity”.

The story of a Belgian princess, granddaughter of the King of France, married to an Austrian archduke, and unwilling to spend her life as a useless appendage of the Hapsburg monarchy—an obsession which later led to her insanity and her husband’s execution by the Mexican Army, was a tale that for me had all the elements of opera. In 1861, a minority of Mexican conservatives convinced Napoleon III, Emperor of France, that installing an Austrian archduke and his wife, Charlotte, as Emperor and Empress of Mexico, backed by a strong French army, would be the right medicine to cure Mexico’s forty years of anarchy. Charlotte, now known as Empress Carlota, was a strong woman, ambitious, with an unassailable confidence in her abilities; she pushed Maximilian into accepting the Mexican throne, a decision he never would have made by himself. As regent, whenever the Emperor left the capital to tour his empire, Carlota, by all accounts, accomplished far more than her idealistic, impractical husband. She therefore has the distinction of being the only woman in the whole history of Mexico who ever ruled the country, if only sporadically. Had she been the sole ruler the Mexican Empire might have enjoyed a longer life. But the venture was doomed from the start: the arrogance of the French to think they could just walk into Mexico with no resistance, Carlota’s refusal to realize that a monarchy was not wanted in Mexico, and a country, three times the size of France, that was impossible to control with just twenty-eight thousand French troops, all these were warnings of disaster. After only two years, the end of the Civil War in the U.S and American demands that France get out of Mexico left Napoleon III with no option but to withdraw his troops and terminate the Mexican Empire. Instead of abdication, Carlota appeals to Max’s honor to stay in Mexico while she goes back to France to persuade the French emperor to change his mind. In the process, an abnormal fear of failure and ridicule, and the knowledge that she had left Max to fend for himself, caused her to lose her own.

The Empress Carlota of Mexico, who is 86 years old, has been enclosed here for the last sixty years.

Maximilian and Carlota are on their way to rule their new country, Mexico. They argue over whether it was the right decision to go.

The imperial entourage receives no reception until a group of Indians, who see Maximilian as the return of an ancient god, give them a warm welcome.

The Archbishop Labastida, Generals Bazaine and Almonte, debate whether or not the Empire will be successful. Max and Carlota make a triumphal entrance. Carlota herself crowns Maximilian as Emperor.

The empire is not going well. Carlota laments her husband’s weakness as a ruler and her own inability to have children. Max and Carlota have an intense argument with General Bazaine and Archbishop Labastida ending in anger on both sides. A ballet is put on for the monarchs, but Carlota feels insulted and threatened by the production.

Carlota sits among the ruins and feels that they speak to her with warnings of her fate. Max and General Bazaine arrive to tell her that Napoleon III has lost faith in the Mexican Empire and is withdrawing his troops. Carlota persuades her husband not to abdicate and vows to travel to France to convince the French emperor to change his mind.

Prior to her departure for France, Carlota sits in a rustic inn, wearing a large black coat with a hood over her head so as not to be recognized. Students enter the inn and sing songs making fun of her. One of the students recognizes her and exchanges a rose for her chewed up handkerchief. After the students leave, Carlota falls asleep and has a dream (pantomime) that presages her fate.

Carlota barges in on a masked ball hosted by the Emperor of France. She argues with him unsuccessfully and loses her mind in the process.

A shabby Mexican peasant fools a guard into revealing that Maximilian is imprisoned and is awaiting execution. President Juárez’ ministers argue the fate of Maximilian, but Juárez decrees that he must die.

Maximilian makes an impassioned speech before being executed by the Mexican army.

Carlota is on her deathbed. A letter arrives from Mexico written by the granddaughter of the soldier who gave the Empress a rose sixty years before. Carlota sings her final aria, comparing herself to a caretaker of flowers that “hid their faces from me.” She then dies letting go of a desiccated rose.